If you are having trouble using the system, please try our help guide.

It noted that whilst the LDP represents a key part of the strategic picture both within the County and regionally it does not sit in isolation of other Plans and strategies. A number of these provide guidance for Plan preparation, others are part of a strategic suite of documents which shape how the region and County will develop over the coming years.

The £1.3 billion Swansea Bay City Deal was signed in March 2017 The City Deal is expected to give the Swansea Bay City Region a permanent uplift in its GVA of £1.8 billion and will generate almost 10,000 new jobs over the next 15 years.

The proposed Wellness and Life Science Village along the Llanelli coastline will become the largest ever regeneration project in South West Wales and aims to improve the health and wellbeing of people across the region.

A creative industry project at Yr Egin in Carmarthen seeks to take advantage of the new infrastructure proposals of the Internet Coast. Yr Egin will create major and positive change in the creative and digital economy of Wales.

The consultation draft National Development Framework (August 2019) makes reference to three regions which provide a focus for Welsh Government policy and future investment. Carmarthenshire is included within the mid and West Wales region. Swansea Bay and Llanelli is identified as a focus for growth, whilst Carmarthen is identified as one of the regional centres.

The Council is in regular and close contact with neighbouring authorities, both individually and collectively at regional level (through the South West Wales Regional Planning Group), to ensure alignment between respective LDPs.

The Plan has been prepared with regard to and where appropriate in co-operation with neighbouring authorities. This has included evidence gathering and research across the broader region but also at a sub-regional level between those authorities undertaking Reviews of the LDP's.

Certain factors preclude complete conformity, but constructive discussions and shared information and experience minimised the risk of conflicting policies, and ensured an appropriate level of integration.

Neath Port Talbot County Borough Council adopted its LDP in January 2016 and will be preparing its first review report shortly. Ongoing dialogue has ensured an understanding of the respective approaches and emerging direction of the policy frameworks. The progress of the review into the Neath Port Talbot LDP will be monitored and duly considered as necessary.

The City and County of Swansea adopted its LDP in February 2019. The recent adoption of the Swansea LDP allows for the consideration of their policies and proposals, along with the ability to respond (and integrate) as appropriate in the preparation of the Revised Carmarthenshire LDP. Continuing liaison will ensure a mutual understanding of the respective approaches, with specific dialogue has been undertaken on matters relating to the Carmarthen Bay and Estuaries European Marine Site.

Powys County Council adopted its LDP in April 2018. The Council will continue to examine strategic relationships as part of a strategic regional outlook. Any future review of the Powys LDP will be monitored and duly considered.

Pembrokeshire Coast National Park Authority's examination hearing sessions for its Replacement LDP have now closed. The Park Authority's emerging LDP is broadly compatible with a hierarchical settlement structure and a consistency in the broad planning policy approach with Carmarthenshire. The Council will continue to monitor the Plan's progress towards adoption and work closely with the Park Authority to ensure an ongoing understanding of issues and compatibility. A proactive approach towards regional and sub-regional working is implicit on policy matters, evidence gathering and strategic considerations.

Pembrokeshire County Council adopted its LDP in February 2013. It is considered that there is a broad consistency and alignment in terms of the approach from a policy and strategic perspective. The vision and the spatial framework for a hierarchy of settlements in general terms is compatible. There is also a broad alignment of approach to the scale of development and growth. The role of Carmarthen as a regional centre is mutually recognised with the complementarity of settlements developed and understood through the Wales Spatial Plan: Pembrokeshire County Council are in the process of preparing their replacement LDP with a comparable timescale to Carmarthenshire County Council. The broad alignment outlined above remains. A proactive approach towards regional and sub-regional working is implicit on policy matters, evidence gathering and strategic considerations.

Ceredigion County Council adopted its LDP in April 2013. Whilst it is considered that the respective settlement strategies of Ceredigion and Carmarthenshire differ slightly, there is a general compatibility with the respective visions. There is a commitment to respect and maintain the diversity and quality of the plan areas, to reduce the need to travel and to sustainability and the creation of sustainable places. Ceredigion County Council are in the process of preparing their replacement LDP with a comparable timescale to Carmarthenshire County Council. The broad alignment outlined above remains. A proactive approach towards regional and sub-regional working is implicit on policy matters, evidence gathering and strategic considerations.

Brecon Beacons National Park Authority adopted its LDP in December 2013. It is considered that there are no clear cross border settlement issues. The Park Authority are in the process of preparing their replacement LDP with the Preferred Strategy having been published in the summer of 2019. A proactive approach towards regional and sub-regional working is implicit on policy matters, evidence gathering and strategic considerations. The implications of proposals in the west of the Park will be duly considered - particularly in terms of the level of housing apportionment.

We will, through the membership of the South West Wales Regional Planning Group (SWWRPG) continue to work closely particularly in understanding and developing the concept and opportunities for a Strategic Development Plan (SDP) across the region. A number of focused meetings have already been held to scope and understand its potential thematic and spatial extent.

This sets out the vision, objectives and a long term strategy for a 20 year period and a five year programme of projects. The Plan encompasses the region which fall within the administrative areas of Carmarthenshire County Council, Neath Port Talbot County Borough Council, Pembrokeshire County Council and the City and County of Swansea.

The SWWTP had responsibility for delivering the national tourism strategy at the regional level. Whilst wound up in 2014, Visit Wales continues to maintain its ongoing commitment to Destination Management through Regional Engagement Teams.

These reports are produced in accordance with TAN21: Waste and set out to collate and assess available data on all waste arising's, landfill void and the management of residual waste in the region in order to monitor trends and ultimately monitor performance against the targets set out in Towards Zero Waste. It also assesses the progress of waste policy coverage in LDPs, as well as providing information on current local authority waste management / resource recovery schemes and future procurement.

The River Basin Management Plan for the Western Wales River Basin District is prepared under the Water Framework Directive. It describes the current condition of the river basin district and what has been achieved since 2009; details the Programme of Measures for improving the water environment by 2021, and provides the water body objectives.

This Plan was approved on 2 May 2018. It outlines how the Public Service Board will work in partnership to address some of the key issues affecting the well-being of the citizens and communities of Carmarthenshire. Reference is made to the Carmarthenshire "at a glance" section which sets out considerations in terms of Demography, Economy, Health and wellbeing, Environment and Culture. The four wellbeing objectives are:

This is the Council's Corporate Strategy for the period 2018 – 2023 (approved 2018 – updated 2019). It sets out the direction for the Council over the next five years, incorporating its improvement and well-being objectives as defined by legislation (see figure 1 overleaf). It also references the Executive Board's key projects and programmes for the next five years, a set of almost 100 priority projects.

The strategy outlines the Council's vision for the future through 15 objectives under four key themes - to support residents to: start well, live well and age well in a healthy, safe and prosperous environment. The 15 Well-being Objectives cover the broad range of Council Services to ensure economic, environmental, social and cultural well-being.

Motions passed by the Council

Those motions relevant to the Revised LDP passed by the Council recently include declaring a climate emergency along and focusing on planning and the welsh language.

This sets out Carmarthenshire's regeneration strategy, building on the opportunities for growth and investment. This in turn reflects Carmarthenshire as a confident, ambitious and connected component of the Swansea Bay City Region.

The Council published its five year vision for increasing the supply of affordable homes in 2015 and, in 2016, it set out our first ambitious programme to deliver over 1000 additional affordable homes across the County. September 2019 saw the fourth year of delivering affordable homes and in the first three years the Council has been very successful with nearly 700 homes delivered, ensuring that the Council is well on course to reach its 1000 homes target.

The affordable housing action areas are as follows: Carmarthenshire Rural and Market Towns; Ammanford and the Amman Valley; Carmarthen and the West; and Llanelli and District. 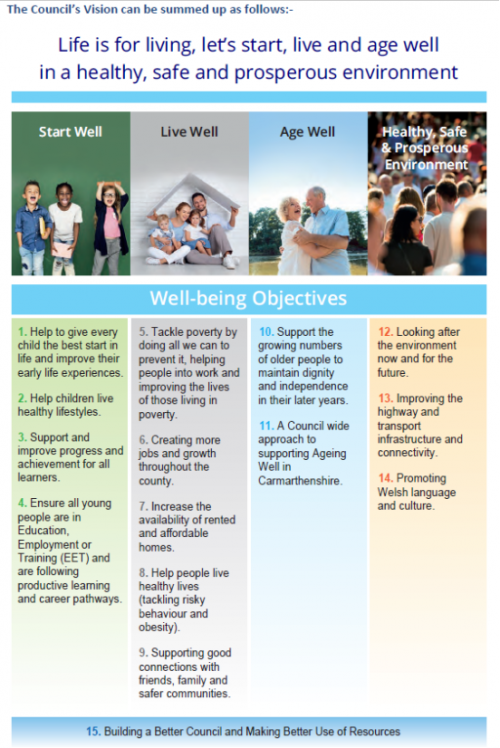 Building More Council Homes – 'Our ambition and plan of action'.

At its September 2019 meeting, the Council endorsed an ambitious investment programme of nearly £150m that will deliver over 900 new Council homes. This plan seeks to align to the Affordable Homes Delivery Plan and provide even more affordable homes in the County. The homes will be built using a range of delivery models, with the delivery of the new build programme following the affordable housing action areas.

Report and Recommendations of the Carmarthenshire Rural Affairs Task Group

In 2005, the Council adopted its Modernising Education Programme (MEP). The aim of the MEP is to ensure that the network of schools meet current and future needs, and that it does so in a strategic and operationally effective way. In doing this, the MEP identifies future requirements for investment to ensure the delivery of suitable and sufficient provision of school places and sets out future investment plans in a coordinated and structured manner.

The Council's MEP is an ambitious and progressive strategic approach which delivers a series of high quality education facilities across the County. In developing this role and function paper regard has been had to the work already undertaken to date, and it also considers what is known to be programmed for the future.

If you are having trouble using the system, please try our help guide.
back to top back to top